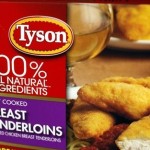 The next time you’re browsing the grocery store cooler, you might notice a curious word affixed to the chicken package: Natural.

Current USDA rules allow manufacturers to inject salt/sugar/flavor solution into their chicken products and still slap on the ‘natural’ label.

But the agency agreed to take another look at its policy after some producers, politicians and health advocates noted that about one-third of chicken sold in the U.S. was injected with additives that could represent up to 15 percent of the meat’s weight, doubling or tripling its sodium content. Some argue that could mislead or potentially harm consumers who must limit their salt intake.

So how do you know when the natural chicken you’re eating has had this extra solution added? That’s what’s confusing.

Perdue, the nation’s third largest poultry producer, is among those pushing for a change. The company has joined a group called the Truthful Labeling Coalition, which has hired a lobbyist and launched an advertising campaign.

“Our labels say natural or all natural only if there is nothing added,” Perdue spokesman Luis Luna said. “Under no circumstances is it acceptable to label poultry that has been enhanced with water or broth or solutions as natural, or all natural.”

Who are some of the ‘natural’ additive offenders? Tyson and Pilgrim’s Pride (just the country’s biggest chicken producers). They refer to additive-laced chicken as enhanced, and they play it off as giving customers a choice between natural, enhanced chicken and fresh, un-enhanced chicken.

While the language is confusing, the easiest way to think about this debate is to consider the enhanced chicken as a processed food. (Which is really what it is). Many processed foods are all-natural, but you can almost always see the difference between a processed food and fresh whole food.

Enhanced chicken doesn’t really stand out as processed food. Without that information clearly labeled, it’s tough to know for sure what you’re eating. And that’s the argument being raised by critics such as Perdue.

Thanks to the Associated Press for allowing me to use snippets of their article.