This photo has been going around over the last week or so. It’s a picture of mechanically separated chicken. 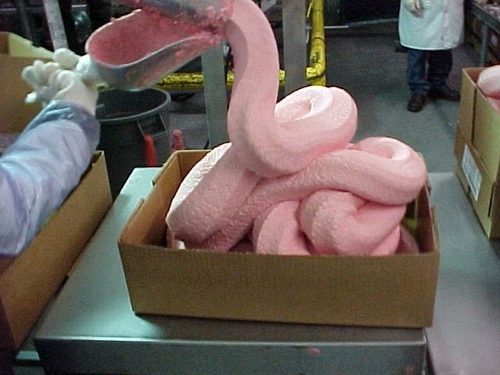 Giant processing plants (like Tyson’s) go through a lot of chicken in a day. After removing the breasts, thighs, wings, and drumsticks, you’re left with scraps that no one is going to actively seek out.

Prior to the 1960s, the scraps would be thrown out. New industrial techniques allowed processors to extract more value from chicken carcasses by separating out edible connective tissue and mashing it into a what resembles a chicken paste.

Recent discussion about mechanically separated chicken suggests that processors are throwing everything (bones and all) into the masher. This is not quite accurate.

Contrary to what is claimed, the process does not involve the grinding up of entire animal carcasses (“bones, eyes, guts, and all”) into one large, amorphous glob of meat; it is a technique for removing what is left on the bones of a carcass after all other processing has been completed. 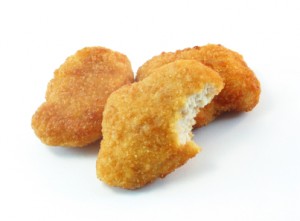 Note that beef can no longer live out its mechanical separation dream. In 2004, as a response to growing concerns about Mad Cow Disease, the USDA’s Food Safety and Inspection Service declared mechanically separated beef to be inedible and unfit for human consumption