What’s in a McRib? Ingredients and a brief history 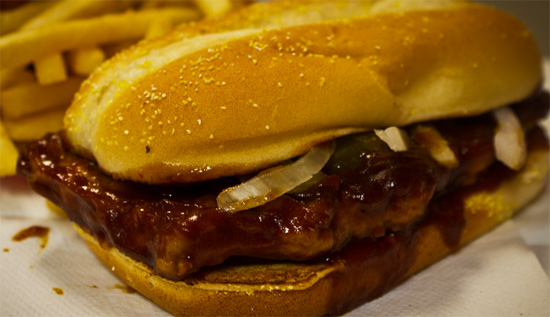 Call me a hater, but I’ve never tried a McDonald’s McRib sandwich. Then again, in the last decade I’ve eaten McDonald’s fast food a grand total of two times.

With a pork patty at its center, the McRib departs from McDonald’s standard hamburger and chicken fare. And though it has ‘rib’ in its name, that patty is mostly pork shoulder. After heating, the McRib is slathered with barbecue sauce, then topped with onions and pickles.

The McRib was introduced in 1981 to help curb a McNuggets-induced shortage of chicken. That’s right, McNuggets were so popular that Americans literally ate up McDonald’s chicken supply chain. Executives hoped that the pork meat McRib would take off in similar fashion. Alas, it did not, and the sandwich was removed from the menu in 1985.

But that’s not the end of our story. McRib made cameo apperances in the late ’80s and early ’90s before being brought back nationally in 1994 as a tie-in with The Flintstones. And on the menu it stayed until a ‘farewell tour’ in 2006-08. And despite the farewell now being over, the McRib has re-appeared both regionally and nationally for limited times.

On the surface, it may seem that McDonald’s executives have no clue what to do with the McRib. I think they’ve marketed this sandwich perfectly. Though Americans prefer beef and chicken, the McRib sells because of its notoriety. You have to snag one while you can, otherwise you may be waiting years until it resurfaces.

Ingredients in a McRib sandwich

With that out of the way, let’s put the McRib under a microscope. Here’s a list of ingredients, drawn from McDonald’s website (source PDF).

Did you get all that? McRib has 70 ingredients, and they’re not that bad (in terms of being natural). But we see some red flags: high fructose corn syrup, to start. And also azodicarbonamide. Azodicarbonamide, a flour bleaching agent, is used in the production of foamed plastics. Yes, the McRib bun contains an ingredient also found in gym mats.