Behind Coca-Cola and Pepsi, perhaps the most prominent soft drink in the United States is Mountain Dew. With its neon-yellow tint and sugar rush, Dew is marketed heavily toward the ‘gaming geek’ sector—I remember it once being described as a foundational component of ‘geek fuel’. Whatever Mountain Dew is or who is drinking it, someone is buying. In 2009, Mountain Dew generated over $5 billion USD in revenue for its parent conglomerate.

According to the ingredient label, standard Mountain Dew contains the following ingredients:

Despite the number of interesting labels in that list, it actually surprises me in a good way. There does not seem to be any use of artificial flavor. 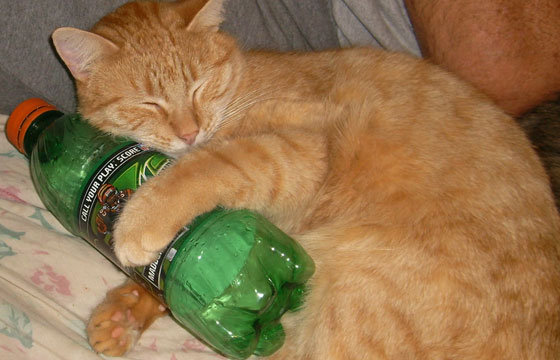 And that makes the cat picture above quite happy. Still, though, there are even a few ingredients I have rarely seen in food, namely erythorbic acid and brominated vegetable oil. Some research indicates that erythorbic acid is just an isomer of ascorbic acid (vitamin C), and is produced from natural sucrose. Brominated vegetable oil has been used, for decades, as an emulsifier to keep citrus flavors distributed throughout the beverage. Because oil would otherwise rise to the top of the liquid, it is precisely brominated (made heavier) to match the density of water. Mountain Dew isn’t just made—it is very carefully engineered.

There are two clearly artificial ingredients in Mountain Dew: Calcium disodium EDTA and Yellow 5. Yellow 5 has a long history as a synthetic coloring agent. EDTA is a bit different.You can read more about it in a past article devoted to EDTA.