Is it time for a ban on artificial food dyes?

Artificial food coloring comes in bottles labeled ‘Yellow #5’ or ‘Red 40’. Natural food advocates skip that crap out of habit and know how to spot it on grocery store shelves (hint: if it looks too cheap and good to be real, it’s not). Fake colors are an easy and inexpensive way for food processors to make their products more appealing.

My decision to skip artificial coloring has not been about its safety. I trust the FDA to keep an eye on common food additives and periodically assess their health risk. But who regulates the regulators?

The Center for Science in the Public Interest is lobbying for the FDA to ban three common dyes: Yellow #5, Red 40, and Yellow #6.

Why? CSPI says that the evidence is in the FDA’s own studies.

Some dyes have caused cancers in animals, contain cancer-causing contaminants, or have been inadequately tested for cancer or other problems. Their continued use presents unnecessary risks to humans, especially young children 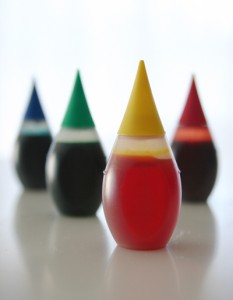 On that count, I think CSPI nails food safety. Nothing’s going to change soon, though.

If you’re interested, though, check out food coloring use in other countries. In the United Kingdom, a McDonald’s stawberry shake is colored by—get this—real strawberries. Fanta’s orange soda? Pumpkins and carrot extract. U.S. versions use Red #40 and Yellow #6, respectively.

You’d like to think that this is the result of American ingenuity, but it’s really just industrialized food production. Artificial coloring is cheaper than the real stuff, so manufacturers stand to make more money by throwing in some dye and calling it good.

Here’s hoping the FDA takes an extended look into its own studies and the result of independent analysis.