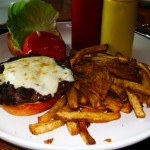 An update on “Kobe Beef” found in the United States

Kobe beef is, perhaps, the most sought-after steak in the world. How does a cow get to be worth $300 per pound?

Summer is a great time for grilling out. If you’re in the mood for something different, try a kabob. They’re easy to make and you can put all sorts of crazy stuff on them.

A natural and organic hot dog for summer grilling

This Applegate Farms product is a natural alternative to the cheap frankfurters seen at most backyard barbecues.

A few years ago, proponents of grass-fed beef brushed off the E. coli threat, saying that grass-fed cows with natural digestive pH levels are not carriers of hardy O157:H7. This no longer appears to be the case.

A beef with ammonia