What does the acronym EDTA mean?

No. EDTA is purely a chemical, synthesized from ethylenediamine and other agents.

What foods will I find EDTA in?

Mayonnaise is one of the most common foods in which you will find EDTA. EDTA is also used to protect color in some cheap soft drinks. In foods, EDTA will often be present in the form of calcium EDTA, or calcium disodium EDTA—so look for that on your ingredient label. 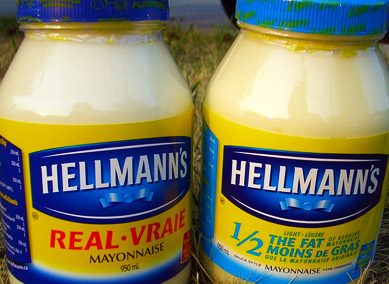 Why is EDTA even used?

EDTA has many useful attributes that food scientists love, but to date its most important role is as a preservative. EDTA is remarkably efficient at stabilizing mixtures of fats and oils, retaining consistency for long periods of time and extending shelf life. As you’ve seen in natural products, sauces and mixtures with oil tend to separate. Though there’s nothing wrong with separation, as you can easily stir it up, it can make the product less appealing to grocery store customers.

EDTA has been approved by the Food and Drug Administration as a food additive generally recognized as safe. Additionally, EDTA is safely used as a chelating agent for people with heavy metal or mercury poisoning. The chemical enters the bloodstream, binds metals, and most of it departs. While this is great for someone with too many metals, a high dose of EDTA administered to someone in good health could have toxic effects. Our bodies need certain metals to complete complex cellular reactions. And don’t forget that hemoglobin in our blood uses iron. The amount of EDTA used in food products, then, has been set to be far below what would be a toxic level.