Haiti still needs help, and while charity is usually a nice thing to see, sometimes the gift can make things worse.

Monsanto is in the process of donating 60,000 sacks of hybrid seed (corn and other vegetables) to Haitian farmers. That’s about USD$4m with of product.

The act sounds like it’s in good faith. Elizabeth Vancil, Director of Global Development Initiatives for Monsanto, said Haiti’s devastated economy means many farmers might not have found enough seed to support their families and communities. 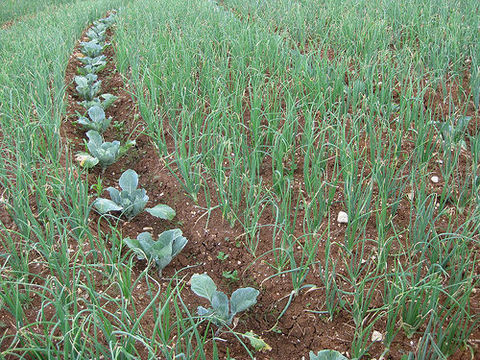 At least one group of farmers is condemning the entrance of hybrid seed.

AlterNet reports that Chavannes Jean-Baptiste, peasant farmer leader of the Peasant Movement of Papay (MPP), has called the entry of Monsanto seeds into Haiti, “a very strong attack on small agriculture, on farmers, on biodiversity, on Creole seeds.”

Hybrid seeds are a big deal for three reasons.

The hybrid corn seeds Monsanto has donated to Haiti are treated with the fungicide Maxim XO, and the calypso tomato seeds are treated with thiram. Thiram belongs to a highly toxic class of chemicals called ethylene bisdithiocarbamates (EBDCs). Results of tests of EBDCs on mice and rats caused concern to the U.S. Environmental Protection Agency (EPA), which then ordered a special review. The EPA determined that EBDC-treated plants are so dangerous to agricultural workers that they must wear special protective clothing when handling them. Pesticides containing thiram must contain a special warning label, the EPA ruled. The EPA also barred marketing of the chemicals for many home garden products, because it assumes that most gardeners do not have adequately protective clothing.

Second, this seed can create a reliance on Monsanto’s products. Monsanto doesn’t allow farmers to re-use seed; they have to pony up for new seed every year. So while this round may be free, Monsanto’s rules would require Haitian farmers to fork over cash year after year.

Third, the move could devastate Haiti’s native agriculture. The situation is analogous to humanitarian food camps: if locals have a choice between paying for food and getting free food, they will probably choose free food. That puts the farmers out of business (they can’t compete), creating a situation in which the area becomes even more dependent on humanitarian aid.

While I personally applaud the spirit behind altruistic acts of charity, sometimes a community will be better off (in the long run) without it. Proper steps need to be taken to distribute the Monsanto hybrid seed without endangering workers or creating a lasting dependence.