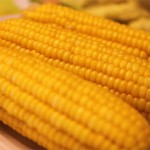 Overfishing: The rise of farmed fish and Frankenfish

The incredible demand for sushi and other seafood has put a lot of strain of the planet’s natural fish stocks. We are simply overfishing our oceans

Frankenmaize and other GM crops are generally banned from cultivation in Europe. Slip-ups in documentation raise concerns for the future.

Can you picture xanthan gum growing in nature? Of course you can’t. No one can. Xanthan gum is a second-order natural food additive, and it’s in a lot of the stuff we eat.